It’s not always convenient carrying around a compact flashlight in your pocket, especially when there are other things like change, keys, a knife and other junk taking up space. Luckily technology has gotten to the point where you can carry a lot of light in a flashlight that’s smaller than a Mini-Bic lighter. Micro keychain flashlights are really convenient to carry everyday and don’t take a lot of space in your pocket or on your keychain.

I have several different types micro LED flashlights. Many of them are those cheap coin-cell squeeze lights.

When you can buy them for less than $0.50 a piece, you just use the light and toss it in the recycle bin.

The thing about these little flashlights is that when you have one, you tend to use it a lot more than you thought you would. It’s kind of the same thing as carrying a pocket knife.

Why Carry a Micro LED Flashlight when I have my Phone flashlight?

The general consensus among most people is that a phone’s flashlight is going to be good enough.

While that might be true in many situations, it’s not going to work in all situations that a dedicated flashlight would work. One of the most notible being if your car breaks down in a downpour at night. Your phone would probably crap out while most flashlights have some water resistance and would work perfectly fine.

Another reason is that it’s easier to pull a micro flashlight out of your pocket than fumble with your phone trying to get the light on.

If you happen to be in a stressful situation, like the car breaking down, just getting the phone light out is going to be even more stressful and cumbersome as opposed to pulling out a flashlight and clicking the button.

As one of the cheapest (and most disposable) options, the Micro Squeeze lights provide convenient, handy light when you need it. These lights are powered by two 2016 coin cell batteries and will run for about 8 hours at full brightness. Outputting 20 Lumens of light, these mini LED lights are great for illuminating a small work area, reading at night and having as a backup light in your backpack or purse. They aren’t waterproof, but do resist moisture to some extent. 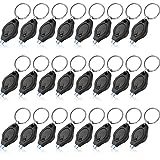 The Olight i1R EOS is a dependible mini keychain, dual-mode flashlight that easily goes everywhere your keys og (or just carry in the pocket of course). It has a maximum output of 150 lumens, more than enough to light up your car’s engine bay or rummage around in the attic. The i1R has a built in battery and takes about an hour to recharge. With a 6 hour low mode (5 lumens) and 15 minutes on high, the one drawback to this light is that there’s no inbetween — Like it could have used a 35 lumen mode that balances good light with long runtime. Other than that, it’s a solid IPX8 (submersible to 2 meters) pocket flashlight. 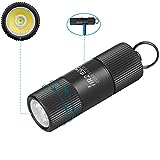 Designed for keychain carry specifically, this Streamlight KeyMate is a small, rechargeable flashlight shaped like a key with the LEDs on one side of the shaft. It’s designed for close quarter light, but can put out 35 lumens for an hour, or 16 lumens for two hours. It comes with a Micro-USB cable and rechardes in roughly 30 minutes. Size-wise, the KeyMate is slightly bigger than a normal key, but smaller than a keyfob.

The RovyVon A5 is a very unique mini flashlight offering a main LED emitter at the top where you normally would expect it to be, but also carries a red signal light and small white floodlight on the side of the flashlight. It boasts a 66 hour run time at 3 lumens, but also has a 25 lumen/10 hour mode. When put in either the 400 lumen and 650 lumen modes, the flashlight runs at full lumens for 100 seconds, then steps down to 90/130 lumens respectively to avoid overheating and damage. 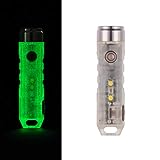 NOTE: This is a disposable light! The Panther Vision button lamps are small one-time use lights (unless you like tinkering and hacking things) that have a 13 lumen output. Runtime is 17 hours, but the best feature about these little lights are that they are really small. Perfect for stuffing in your Altoids Survival kit as a “last resort” light. 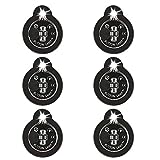 The MecArmy FL02 is one of the more stylish EDC flashlights out there.  Perfect if you want to add some style to your gear. Crafted from titanium, this little everyday carry flashlight can take a beating! It offers a maximum 360 lumens and up to 8 hours runtime. 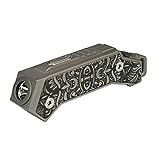 The Nitecore Tip 2 is my favorite keychain flashlight in this group. It has two LED lights and a bunch of modes that give you a lot of different options for whatever situation you need the light for. The Tip 2 is also programmable allowing you to change the configuration to suit your needs. It comes with a removable clip and Micro USB cable. When used at full lumens, the beam throw reaches about 50-75 yards in real life (The marketing package says 100 meters, which might be true). I just know that I can still identify things at a range between 50-75 yards. 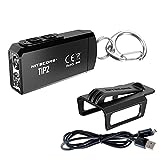 The Nightcore Thumb is a nice general purpose keychain EDC light. It has a unique rotating head to put the light whereever you need it. It’s a perfect pocket light for those that really don’t need a really high power flashlight, and want a nice balance between light and run times (45 minutes @ 85 lumens, 22 hours @ 3 lumens). The light takes about an hour to recharge. and is water resistant (not waterproof). 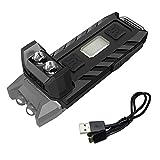 The Fenix E16 is about the length of a Mini-Bic lighter and offers a lot of light from a single rechargeable 16340-cell (included) EDC Flashlight. Also compatible with CR123 Lithium Cells (300 Lumens max). 5 Lighting modes offer flexibility for whatever situation you need light for, and offers up to 70 hours runtime at low setting (3 lumens). 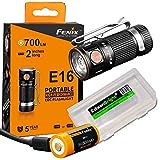 The TrustFire MINI2 is an extremely small EDC light that puts out a lot of light for its size. At just 1.54 inches long, this little powerhouse will fit almost anywhere you want to stash it. The light offers two light modes, running 5 lumens for 7.5 hours and 220 lumens for 23 minutes, with a recharge time of just 30 minutes. It is also is IPX8 Waterproof. 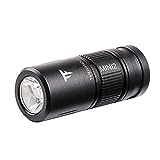 Its not always a good idea to go for the flashlight that puts out the highest lumens. Also, it’s not always the best idea to look for a flashlight with the longest run time.

What you want to do is look for a good balance between flashlight size, runtime, and lumen output that works for your Everyday Carry.

If you already carry a flashlight, or have in the past, you know already that you’ve used it more than you thought you would.

Many flashlights have multiple light output settings. This gives you the option to save battery life for some situations and having high-power light when it’s needed.